Coventry University in central England is renowned for its programs in industrial and consumer product design, with many graduates immediately being snatched up to work at prestigious firms like Land Rover and Jaguar. 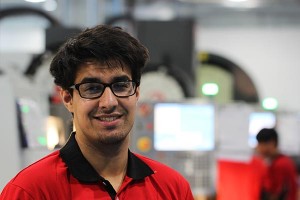 In 2010, Haider Ibrahim entered the University to pursue his passion in product and industrial design, taking on a four-year BA (honors) degree. That interest was first ignited when, in year eight, he saw at his school his first piece of advanced computer-controlled equipment, the Roland Modela laser-cutting machine. His instructor at the time made a small acrylic gear using the machine, etching Haider’s name on it as a keepsake – which he still has to this day. From then on he knew he wanted to combine his love of drawing and sketching with the emerging world of computer graphics and design.

At the same time, one his best friends and neighbors from Birmingham, Nash Chawora, had also enrolled at Coventry on a four-year MDes program. In their third year as design students both were chosen to go to Hangzhou, China for three months on an internship, using the facilities of a university there but on behalf of four Chinese firms looking for design help. There the group of ten students was tasked with several types of design services, including pure graphics work for company logos and brand building and designing consumer products such as handbags, electrical devices and industrial street lighting fixtures.

Both Nash and Haider were exposed to Asian culture for the first time, but once their internships were over they had to return to England to complete their degrees. Haider particularly feels that his work changed a lot after his time in China, his designs becoming more mature and confident, something his instructor also commented on upon his return.

In their final year they were both tasked with completing a project for their senior’s thesis. Students are encouraged, though not required, to consider an idea associated with one of the University’s “Grand Challenges”, which include The Ageing Society, Low Carbon Vehicles, Human Security and others. 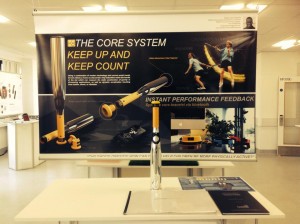 Nash’s exhibition of the Smart-Bat Project

Nash chose as his senior project a device shaped like a traditional American baseball / softball bat, but which contains within it an accelerometer and other sensors that allows schools in the UK to track student’s activity levels and performance. Nash was concerned about the grim statistics of childhood obesity rates and the attendant health and social costs. But designing a product is one thing, making it another. Nash looked around at various prototype shops in England, but couldn’t find one that he could afford and that was able to do what he wanted in one shop. Eventually his search turned up Star Rapid in China, and the quotation he received for the job was so reasonable that Nash was able to afford to fly out to China to see his project coming to life.

Nash was, to say the least, surprised to find not only a full-service shop, but also an international group of locals and expats working and living together in harmony. Nash is the first to admit that he’s not really the hands-on kind of guy, and if he has one weakness as a designer it’s that he’s not really so familiar with the production processes necessary to bring a concept to life. But after being introduced to the Star team and seeing his own prototype taking shape, he’s found new respect for the expertise involved. He also thinks the prototype came out better than he ever dreamed. More details of that project can be found here.

Meanwhile Haider was working on his own thesis project. He decided to focus on the ageing population, and his research took him to sheltered accommodations or assisted living facilities, where he spoke to many elderly residents and learned of their challenges and frustrations. Most of the people he talked to wanted to maintain their dignity and independence, even with quotidian chores like doing laundry. Now the commercial market had available various carts or laundry hoppers, but he found them lacking in many ways, so he decided to redesign a better one. Haider didn’t have the resources to have a finished prototype made to order, so be built it himself, using many items donated to him by other care providers who had old chairs or carts with metal tubing that he could repurpose for his new design. 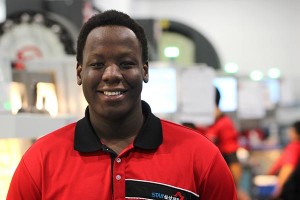 Both of their prototypes were completed on time and displayed at a design show in London.  Immediately after graduation in November of 2014, Nash prevailed upon Haider to consider heading back to China and to accept an internship at Star. During his earlier visit Nash was impressed by the quality of the organization, the advanced equipment and machinery, but mostly by the friendly people. Haider and Nash agree that most businesses in the UK have more formal hierarchies between the “boss” and the “workers”, not the congenial and open atmosphere that prevails at Star. That, and the friendliness of the average man on the street who’s always so happy to talk with his new foreign friends, made the decision to come to Star an easy one.

And what has been the biggest lesson that they’ve learned here? Both men feel that their design work has improved greatly since they’ve been at Star. They now have a deeper understanding of the related production concerns and their designs have come to respect these considerations. They’ve also come to see that there’s a better way to organize a successful business than what they’ve been led to believe. Asked if they would consider using Star as a potential provider in the future, once they become famous designers working for big firms, they both unhesitatingly say Star would be the first choice, for sure.

Now they have hardcover books printed here in China, containing their respective design portfolios. These they will take back with them to England, a sort of resume for their job hunting. But they know they leave behind a new family and a home away from home.