Is This The Future Of 3D Printing? 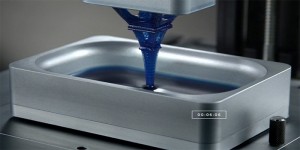 3D printing is still a relatively new manufacturing technology when compared to traditional machining operations, which have been used in some form for hundreds of years.   The industry is changing and growing so fast that categories are rapidly being drawn up to distinguish “traditional” 3D printing, which began in the 1980s, with even more cutting-edge approaches. Till now, all 3D printing processes, whether stereo lithography (SLA) in plastics or selective laser sintering (SLS) of plastic and metal have depended on essentially the same approach to making rapid prototypes or low-volume production parts.

Imagine your 3D finished part, sliced into multiple sections only a few microns thick. This is how parts are “printed” in either metal or plastic. Although the technical details differ a bit, the process is in either case additive but not continuous, there being a “pause” between each layer as new material is laid down and joined to the substrate below it. What you have is a solid three-dimensional prototype that was made by fusing together multiple layers of the constituent raw material. Now additive manufacturing has opened up a lot of new and exciting design development possibilities, especially when making finished parts that simply could not be made by subtractive techniques like CNC machining. But there are drawbacks.

For plastics especially, 3D printing is limited in the type of material that can be used, while the resulting part has relatively poor surface quality and suffers in mechanical strength compared to injection-molded parts. Also, the layering process can be slow, a single part taking hours to make, longer than many machining operations. The time factor is a necessary evil, acceptable for prototypes or low-volume production, but it likely would not work for full-scale high-volume manufacturing unless someone makes a breakthrough to drastically speed things up.

But now there’s a new technique just in development that might be the breakthrough the industry needs. It’s called CLIP by its 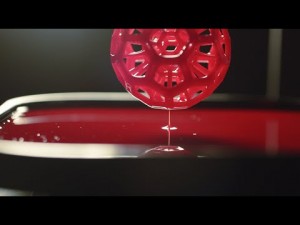 developers, which means Continuous Liquid Interface Production. In essence, a build platform is lowered into a bath of liquid polymer plastic. The plastic is photo reactive, so that when exposed to a UV light source it becomes a solid. In this sense, it’s just like SLA. There’s a window or lens, similar to a contact lens, which is permeable to both light and oxygen but not permeable to the liquid resin. So, the UV light projects the image of the intended part into the liquid reservoir. As the build platform retracts, the part of the resin touched by the light is cured and becomes solid. The remainder of the resin is kept in a liquid state by the presence of oxygen passing through the barrier – the oxygen halts the photoreaction. Hence, a fully finished solid 3D shape is pulled out of the reservoir in a single continuous build.

The process is touted to be much faster than present 3D technology, and it creates a stronger and smoother shape. How much faster? Well, last month Joseph DeSimone, the CEO of Carbon 3D and one of the inventors of the process, gave a TED talk in which he described the promise of this technology. While he spoke, a CLIP 3D printer was set-up on stage behind him, making a complex geodesic ball of interlocked concentric spheres – a shape impossible to make by subtractive CNC machine methods, by the way. The talk lasted for about 10 minutes, while the plastic part was completed in just over six. This is an unprecedented speed, and Mr. DeSimone believes it will only get faster as the technology matures.

Is this really the future of 3D printing? Well, Autodesk, the maker of 3D modeling software seems to think so. They’ve invested US$10 million with Carbon3D to further improve the process. Maybe rapid prototyping is about to get more rapid still. What do you think? Give us your thoughts.

A Better Way To Build?