Of Metals And Men 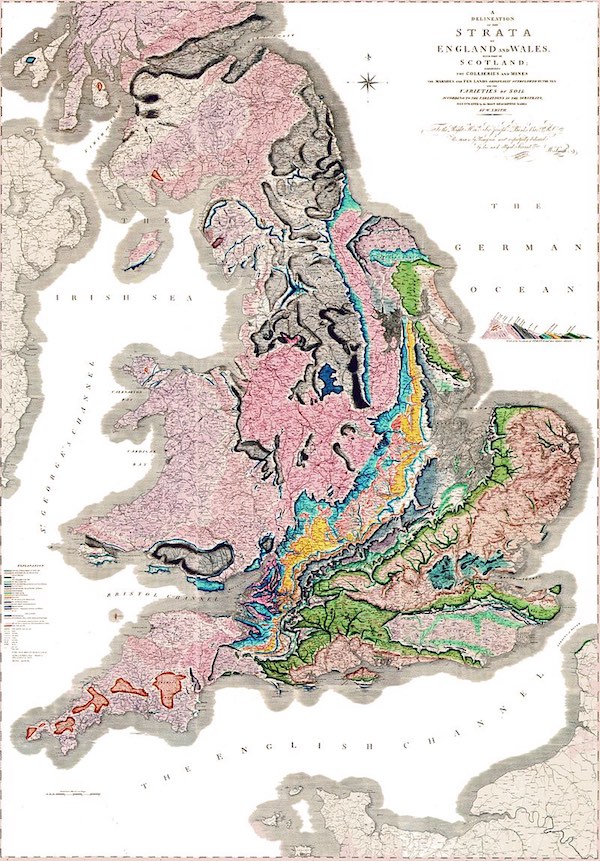 The map above is one of the great intellectual achievements of the Age of Enlightenment, roughly that period of time between the late 1600’s and the dawn of the Industrial Revolution in 1820. During this time, Europe and America experienced an astonishing philosophical and scientific revolution in the natural and political sciences, of which this map is one tangible example.

Made by William Smith in 1815, it is the first detailed geological map of Britain and still a model for all such later works. It showed, among other things, that the Earth was much older than had been previously supposed and lent support to the fledgling evolutionary theories of Charles Darwin. It’s also a sterling example of the work of the so-called natural philosophers, that body of rational men and women who set about to look at the world and to understand it based only upon what could be verified with the scientific method. Although not specifically against the tenants of religion, the age of enlightenment gave a certain fashionable permission to people from all walks of life to be curious about the world, how it worked, and to form learned societies where discoveries and theories could be held up for discussion and debate.

William Smith for example was not a geologist but a largely self-taught hydrologist. In fact, the science of geology did not exist at the time. He invented it. Well, someone had to.

It is to such people that we owe so many important discoveries which now make our material abundance possible. Among those discoveries are the raw materials, culled from mineral deposits, which form the backbone of the manufacturing economy. We’ve already looked a little bit at iron and stainless steel. Now we want to explore a few other metals discovered or purified during the same period, just in time for the industrial revolution. 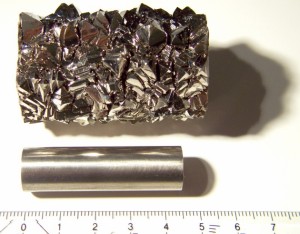 What a wonderful name, given to the lustrous white metal by Prussian chemist Martin Klaproth in honor of the ancient Greek Titans. But it was first discovered by another natural philosopher and country pastor named William Gregor of Cornwall, England, who found it mixed with iron in some black sand along the banks of a stream.

In nature titanium is never found in its pure form but is always a constituent of one of many possible minerals, and separating it out is still an energy intensive and expensive process. That’s one reason titanium is still a pricey metal, although it’s actually the ninth most abundant element in the Earth’s crust.

Titanium, especially as an alloy, has some marvelous properties that make it ideal for 3D metal printing and other high-tech applications. It’s very corrosion resistant for one thing, and when exposed to the atmosphere it quickly forms a protective passivating layer of titanium oxide. It has the highest strength-to-density ratio of any metal (note: not strength-to-weight, which is different). It’s ductile, not very conductive, but best of all is the high heat resistance, making it useful in aerospace applications like in jet engines that must withstand high temperatures.

When 3D printing with titanium, the powderized metal must be kept inside of a chamber of inert gas like argon and away from oxygen, because it would be highly explosive. And did you know that for some crazy reason trace amounts of titanium are found in almost all living things, but seems to perform no biological function? No one knows why, but that may help to explain why it is often used for making medical implants or for reinforcing damaged bones, since it takes well and there appears to be little or no natural rejection of titanium in human tissue. 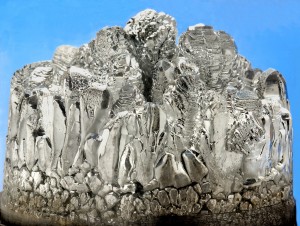 Another “discovery” by a Cornish man of letters, this time the celebrated Sir Humphrey Davy, who used electrolysis to separate pure magnesium out of mercuric oxide and magnesia. Sir Humphrey, by the way, was a pure enlightenment scholar, self-taught as a chemist but brilliant in his observations and experimentations with the natural world.

Magnesium is the eighth most abundant element in the Earth’s crust and the ninth most common in the universe. Unlike titanium, however, it is necessary to human biological functions and is found in every living cell.

In industry magnesium is considered the lightest useful metal, often alloyed with aluminum or zinc for pressure die casting. It is also increasingly being used in aerospace applications because of its excellent strength-to-weight characteristics. Magnesium is also very reactive and never occurs in nature in its pure form. The surface oxidizes quickly in the atmosphere producing a strong and durable passivation layer of magnesium oxide, preventing further corrosion. Aren’t you glad you learned all about passivation in our last blog? And as we all know, it likes to ignite, burning very bright and hot and so is often found in fireworks, flares and explosive compounds. 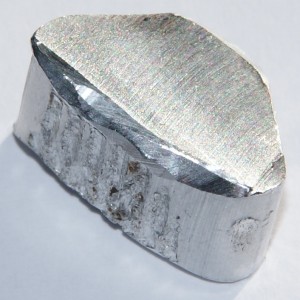 Medicinal uses of alum powder were known to ancient Greek and Roman healers as an antiseptic. Pure aluminum, however, doesn’t appear in nature and instead is found in more than 200 different minerals, the most common being bauxite.

Aluminum is by far the most common metal in the Earth’s crust (iron and nickel are dominant in the core) and along with iron is the most used in industry. Aluminum is soft, lightweight, non-conductive, and can be strengthened as an alloy, most often with copper, zinc, magnesium and manganese. In one of many alloy forms it is often used for CNC machining, either as a finished part or as a mold for pressure die casting.

The metallic root of alum was identified by Sir Humphrey, but it took a number of researchers a long time to find a way to refine it. In fact, it was so difficult to produce in pure form that it was more valuable than gold as late as the 1880s.

Like our other metals here, it oxidizes at the surface to form a robust passivating layer, making it resistant to corrosion. It’s also interesting to note that unlike the ferrous metals or even titanium, aluminum doesn’t glow when it gets hot, making it difficult to weld since it provides no visual clue of its surface temperature. And it’s also found in most plants and animals, while again appearing to perform no biological function that we know of.

We are gifted on planet Earth with a wealth of diverse mineral deposits containing all the ingredients we need to build an advanced industrial society. All of these raw materials originally came from the heart of exploding stars, something that wasn’t even conceived of when William Smith made his geological map. But he would have found it fascinating.

The Engineer’s Bookshelf: Machinery’s Handbook
Sign Up for Newsletter