Portrait Of A Working Man

“About two years ago Ken Adams turned up at our factory to audit us on behalf of one of our UK-based clients. I was astonished at how young-of-heart yet long-of-tooth Ken was! I’m sure he’ll kick me for saying the latter. I never cease to be amazed at the depth of knowledge and experience Ken has in engineering. A few hours into the audit I turned to Ken and said: “How would you like to come and advise my tooling team on how to build mold tools and critique our customer’s injection molding designs better?” At the time we were experiencing a relatively elevated number of production issues that were taxing my team. I felt that they needed advice from someone who had a great depth of experience. Ken has been with the company now as a consultant for two years, and I hope there will be many more years to come. Chris Williams, who recently joined us as our Editor-in-Chief, suggested that we do a series of profiles on our key employees. It was an absolute no-brainer that Ken Adams should be the very first person we profile given his exceptional length of service.

Ken, Geoff (our other British colleague) and I all have similar stories to tell about the feeling of having been thrown on the British engineering scrapheap. I thought it was just myself, but the UK problem of not appreciating engineers goes back a hell of a lot further than I imagined. Long live engineering!” 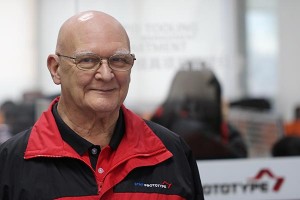 To the northwest of Glasgow, Scotland, along the River Clyde in West Dunbartonshire, lies the town of Clydebank, though in 1883 it was known as Kilbowie. Clydebank at the time was home to a major shipbuilder, John Brown and Company, which among other great ships had built the Lusitania, Queen Mary, and Queen Elizabeth. And it was in 1883 that another famous name, the Singer Manufacturing Company, would open the world’s largest sewing machine factory, eventually employing more than twelve thousand people. Ken Adams was a fifteen-year-old just out of school, in need of employment to help support his widowed mother. Thus Ken joined the Singer Company to begin his life-long career as a toolmaker, machinist and plastic injection molding engineer.

In the first year, Ken couriered blueprints around the giant plant, a sort of glorified office boy, but at sixteen he began the five-year apprenticeship proper. At the time, the apprenticeship program allowed one day off per week from formal vocational training, and this day was spent in additional study at the local college. There was usually only enough time to scribble down notes, and from those notes you would have to teach yourself to do the homework and pass your tests – no tutors available for apprentices!

Most young men of humble means in those days could not afford to go to a University; this was reserved almost exclusively for the wealthy. But via the apprenticeship program, Ken and others like him could achieve the Higher National Certificate, which included the same requirements in physics and mathematics and materials science as a B.Sc. in Engineering. But Ken’s program was geared more towards the practical and hands-on, and indeed a toolmaker would be expected to make a mold from start to finish by themselves, employing a familiarity with every piece of equipment in the tool room. Today that Higher National Certificate is hardly recognized, but it was once considered by many employers to be equivalent to – or even more demanding than – the University degree in engineering, and Ken freely admits that this afforded him and his peers certain bragging rights. A quality toolmaker could hold his head up proudly among any group of tradesmen in the world, and they knew their worth.

From tool making Ken progressed to tool design, working another ten years in Scotland before taking on a new challenge at a smaller company in England, now as a tooling engineer. After a few more years there, Ken became Works Manager at a company in South Africa, largely making technical molds and molding parts and equipment mainly in support of the gold mining industry. And it would be in Johannesburg and later in Durban that he would raise his family over the course of the ensuing eighteen years. The move from Johannesburg to Durban was largely precipitated by the unpleasantness of apartheid and its effect on his young children, who found it much easier to make friends in the comparatively laid-back surfer environment of Durban – even though he accepted a pay cut to make the move. The position in Durban as development manager entailed being part of a team that improved turnover and profits tremendously within three years by installing a management system similar to what is now known as TQM, and setting up a cost reduction team which would now be called a Kazan team.

He eventually headed back to the UK when his children were now in their early twenties, accepting a position as technical manager with one of the better molding and tool making companies in the UK. But this would have been in the mid 80’s, and the economy under Thatcher was not the best for the working man. So Ken, now a seasoned expat, accepted yet another challenge and moved with himself and his wife to Melbourne, Australia to work for Diecraft, a tool making company owned by Tupperware. Diecraft had high quality standards and they were among the first to employ CNC machining to maintain the interchangeability and repeatability required for their products. As “senior design consultant” Ken had to approve every tool and design that came from the factory – after all, these tools were expected to last for fifteen million cycles in production! After seven years in Australia, he again returned to the UK to be closer to his mother, now in her nineties. But he confesses he found it hard to settle down after so much travel, so when the opportunity came to move to China in 1997, he took it.

Shenzhen was even more of a boomtown then, with new factories popping up all over the place, many of them opened by Hong Kong-based ownership anxious to take advantage of the cheap labor pool that China now made available. But his first contract was intended to last for only two years, only enough time for him to establish a new product introduction system that would then render his position as chief engineer obsolete and therefore himself unemployed.

One thing was familiar to him, having worked on new product introductions for such a long time. A new part would come in for development from the designers and engineers, and when that design was handed over to production the toolmakers would then find a hundred reasons why it couldn’t be made. Notably this very seldom happened at Singer, since before becoming a product designer one had to first complete a five year machinist’s apprenticeship followed by another five years as tool designer. Product designers would thus consider engineering aspects of a project concurrent with its final design. The lack of understanding of manufacturing methods by modern designers can often result in not only long development lead times, but also engender a sense of frustration or even cynicism in the work force, each team independently believing the other team is either stonewalling or incompetent. He instituted a system, now commonplace, where all stakeholders in a new design would sit down together at a round table at the outset, discussing the project between the designers, engineers, production and QC staff to insure its feasibility and to anticipate any problems in advance. Better for production, better for morale and shorter lead times.

Although now officially unemployed, Ken had by this time made enough contacts in the manufacturing environment of Asia to land some short-term contracts with various startups under Chinese and German ownership, companies which are now still in business and quite successful – in no small part due to his early input. This period of time also included an additional two years establishing a workshop for another German owned company in Thailand. After an abortive attempt to retire there, he eventually found himself back in England, looking to be closer to his grown children, his wife having passed in 1998. Ken wasn’t quite ready to put his tools down forever, yet no one wanted to hire a “pensioner” in any position worthy of his experience. He was now facing the prospect of letting the seasons pass by him in the way so many others around him were doing – a long, slow decline into obsolescence.

His turning point came when he was in England yet again, this time in company with his new Chinese wife. She looked around and said all she could see was a bunch of old people waiting to die. Ken found himself in a government office, handed a form for public assistance for those deemed unemployable. He went home to his apartment, tore up the paper, and lit out for China again, this time for good.

Industries in the UK, and the Western world generally, continue to suffer for lack of qualified graduates in areas needed for manufacturing in the modern world. Although they may have the certificates of higher education in engineering fields, so many workers lack practical experience or the desire to attain it by getting their hands dirty. All too often, promising talent instead goes searching for jobs in finance or law, so the core disciplines of a foundational economy – manufacturing and its attendant innovation – must find opportunities elsewhere.

Now in the vibrant economy of China Ken finds himself a mentor to a young generation of machinists and design engineers just starting their careers as he had so many years ago in Central Scotland. The difference he finds is that they can quickly draw a part on the computer, but they have little idea of how to make it, something he does automatically and intuitively due to his past experience as toolmaker and tool designer and from running a molding department. He can still walk past a cutting machine and know instinctively if the cutting speed is right just from the sound, a skill that only hands on machinists possess.

Technologies continue to change, of course, and CNC machines can routinely put out tools equal to or better in some regard to the best that was made by skilled craftsmen in the past. And yet even then, skilled toolmakers are still in demand, maybe even more so than before since they are a dying breed. No line of computer code has yet been written that can replicate a lifetime of experience learned in the head and in the hands. Ken has found a second life in China where his skills are newly appreciated.

Could he have imagined that as an office boy running blueprints around a sewing machine factory in Clydebank, Scotland at the age of 15? No, but part of the secret to a happy life is sticking around to see what comes next.

Can You Build a Better Mousetrap?
Sign Up for Newsletter