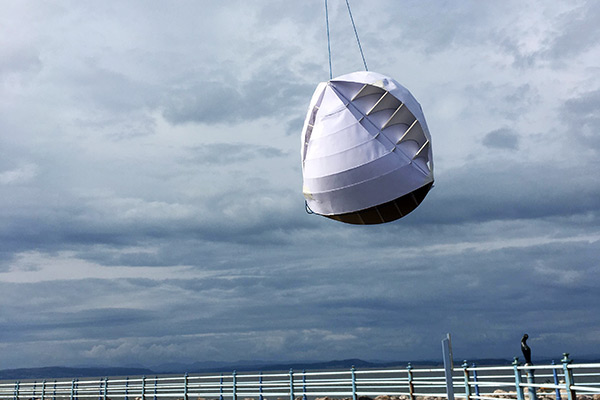 Sir James Dyson is justly famous around the world for his groundbreaking inventions, which include the cyclone vacuum cleaner and airblade hand drier. He is also the founder of a design engineering school at Cambridge University and sponsors the annual James Dyson Award. This prestigious contest challenges new design students to come up with solutions to meet pressing social needs in a way that is both sustainable and commercially viable.

These notable finalists for 2018 showcase the journey from initial challenge through the design stage and to a working prototype. Maybe you can apply their lessons to your next project.

Every day, on average, 20% of the world’s freshwater supply is wasted through pipe leakage. Undetected leaks are not just wasteful – they can to lead to ruptures, flooding and major property damage. But digging for the source of a leak is expensive, imprecise and disruptive to crowded city streets. 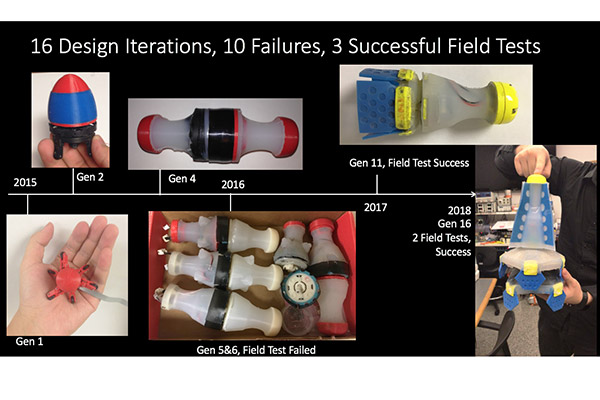 Many prototypes were tried before arriving at one that worked.

Dr. You Wu of MIT spent more than six years working on this solution during his PhD research. He built dozens of prototypes, performed real-world tests and modeled fluid turbulence with a variety of computer simulations before arriving at a working robot. 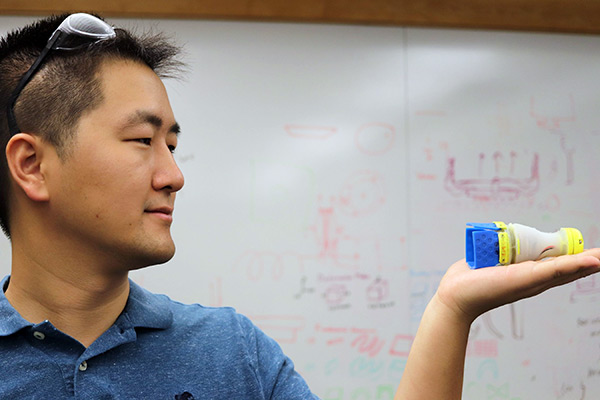 His creation is called Lighthouse. These robots have soft rubber membrane bodies with flexible sensors that respond to minor pressure changes. They fit into a variety of pipe sizes, can negotiate tee junctions, and work in both plastic and metal pipes with much better results than current technology. Using robots like these can save enough water to meet the needs of a billion people, without needing any new infrastructure.

The world’s population may reach 9 billion or more by mid-century, but feeding this many people conventionally requires enormous amounts of land, energy and water. Azcatl (Nahuatl for “ant”) is an effort to nurture an abundant natural resource in a way that is not only environmentally friendly but which can also supply an additional income for traditional farmers. 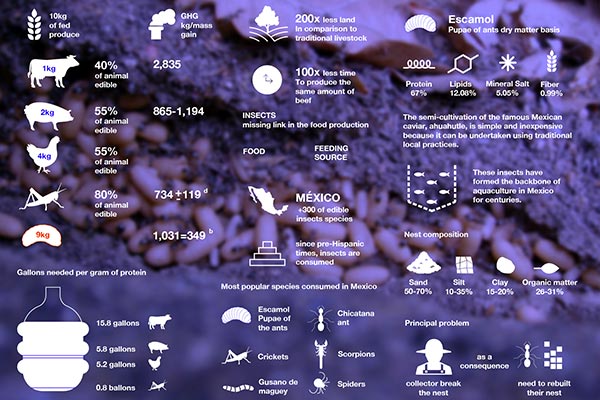 It’s important to understand the scope of the problem before attempting a solution.

After working with biologists, researchers and aquaculturalists, it became apparent that insects can be an ideal substitute for livestock as a source of protein in many regions. The secret was to combine 3D printing with biodegradable PLA corn-based plastic resin. 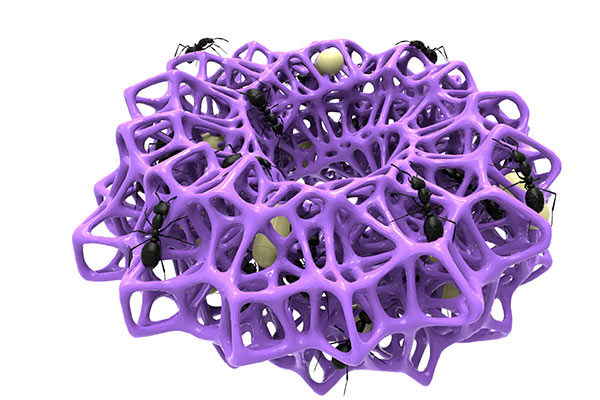 The Azcatl is a 3D-printed ant’s nest, used to provide a ready-made home for an ant species whose pupae have been consumed as a delicacy in Mexico for hundreds of years. Unlike natural nests, these simulated homes can be re-used and are not broken when harvesting the food source. The nest’s are also biodegradable, consume few resources, and can be easily scaled to provide protein to many communities.

Small-scale power generation would be a great boon to the increasing proportion of the world’s population living in urban environments. However, cities are complex artificial landscapes that create and channel wind gusts in random directions. Conventional wind turbines require wind pressure from a single direction, making this a complex task to overcome. 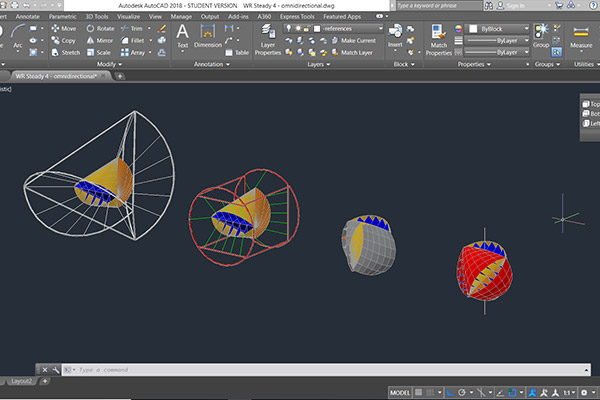 Computer models were essential for getting the mathematics right.

The initial design was an attempt to make a planetary rover for NASA that could be powered in a straight line using multi-directional winds. A variety of geometries were computer modeled, and various working prototypes made from paper, cardboard and fabric. The successful design uses a multi-faceted sphere that rotates on a single axis regardless of wind direction. 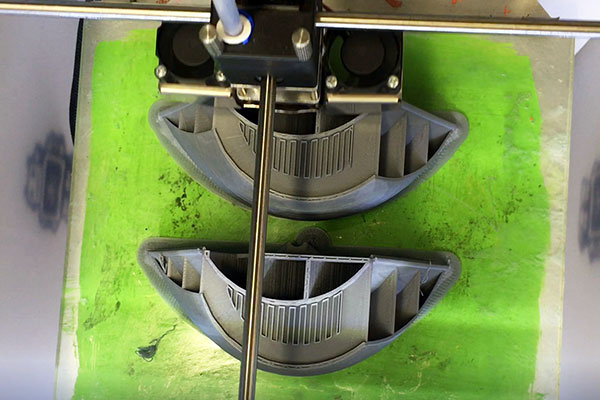 New prototypes being 3D printed at the University of Leicester.

The O-Wind Turbine works by exploiting Bernoulli’s principle. Air enters through large openings but exits through smaller ones, creating a pressure differential that induces mechanical motion. This means the sphere is self-directing and can produce power almost anywhere with little maintenance, perfect for apartment dwellers. The University of Leicester is providing additional 3D printing and engineering support to refine prototypes for eventual certification and mass production.

Plastic contamination of the environment is now a major concern on land and sea. Petroleum-based plastics are very durable and can last for hundreds of years, but the vast majority of plastic waste is in the form of single-use utensils generated by the fast food industry. Is there a way to make a useful, inexpensive plastic substitute that can conserve resources and help to save the planet? 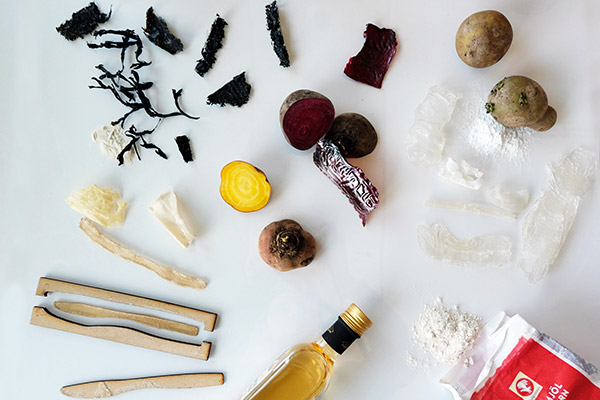 Many different starchy foodstuffs were experimented with before settling on potatoes.

Pontus Törnqvist is a design student at Lund University in Sweden. He set out to find a plastic alternative that was not only sustainable and biodegradable but that would actually reward the act of littering by supplying valuable nutrients in whatever landscape it’s deposited. He did this through endless experimentation with various organic matter, tending to favor seaweed as a nutrient-rich possibility, but it failed to bind into a good useable solid. Only by accident, as with so many great inventions of the past, did he stumble on the answer. 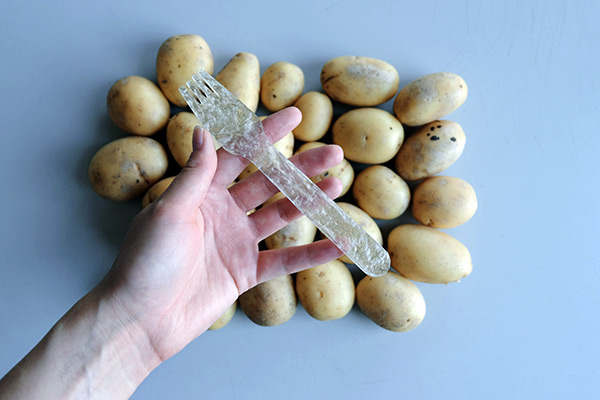 Just a heated slurry of water and potato starch, Potato Plastic can be formed into utensils, cups or thin sheets without the need for expensive metal-forming tools and dies, as would be the case with plastic injection molding. It naturally degrades in a few months and makes good use of cosmetically unappealling potatoes that might not otherwise sell at the grocery store.

Apply their Experience to your next Prototype

Sir James attempted more than 5000 prototypes before getting his vacuum cleaner right, and he credits determination and imagination as the most important qualities for a successful inventor. When it’s time to bring your product idea to life, upload your CAD files for a free quotation today and let’s get started.