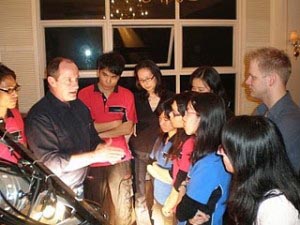 My goal in China is to combine the best skills of the so-called West, with the hard-working dedication of my Chinese colleagues. Therefore, I intend to put one highly skilled foreigner into each of my key departments. I’m currently in Hong Kong having just picked up a 50-year old American pressure die casting expert. Really cool guy called Joe. He’s totally in awe of Hong Kong. Wow, wait until he sees mainland China!

Hope it works out. He certainly knows his stuff. Just 30 minutes in the taxi last night made me realize how much I don’t know yet about pressure die casting. We do a good job now, but that’s not enough. I want my company to do an AMAZING job.

Already we have an American called Bradlee running the rapid prototyping shop, a Brit called Michael running the precision engineering shop, a German called Marcel covering German sales and a Canadian called Christal running our marketing department. My area of expertise is the vacuum casting shop.

I love watching the “newbies” arrive in China and start to see China for the first time. One thing is for sure, the China that is presented by the western Governments and journalists is not the China I know and see every day. The developed parts of China are pretty much like most developed countries. At this point, I would normally refer to the bad driving, but frankly it is no worse than Paris or Rome.

Sure the food is very Chinese, but not what you get in a Chinese restaurant in Middlesbrough or San Diego! Personally, I love it. We even have our own team of chefs to prepare the food in our canteen. I always insist on my table getting a few Western niceties such as pan fried fish and curried potatoes.

The one thing that always strikes the newbies most is how incredibly friendly and innocent the young Chinese locals are. They are a very sweet bunch. That is the one notion that gets me up every morning. Going to work is like going to see your friends and family every day.

Bradlee had only been with us about one month when he realized that the guys were hanging off him whilst he gave his trainings. They are very touchy feeling. Ain’t no personal space in China. NEVER.

China is so demonized abroad. Sure they’ve got some big hills to climb, but China has never struck me as the kind of place that’s going to invade anywhere soon! They’re just too busy eating, chatting, working, singing and toasting! They just don’t have time for fighting. But don’t get me wrong, when it comes to the fight, you wouldn’t want to get in the way!

By Gordon Styles, President and Founder of Star Rapid