Our Top 6 Picks For Movies With Machine Tools

We all know how much Hollywood loves to glamorize some lives over others. How many movies can you think of that tell us all about the fast-paced, exciting and sexy world of Wall Street bankers, slick big-city lawyers, Washington politicians and, of course, cops. Take almost any subset of a complex and diverse workforce and you can find a movie or ten that focuses on their concerns and their way of life: teachers, farmers, scientists, truck drivers, priests, they’ve all been given the Hollywood treatment. But machinists or factory workers? Not so much. You need to dig deep into the archives to find any film, in any genre, that shows any movie star that you’ve ever heard of actually using machine tools to make or fix something.

That’s odd to us, given that actually making and building objects with tools is one of the bedrock, foundational skills of civilization and is a way of life for millions of people. That it’s nearly invisible in mass media and popular culture speaks volumes about how we value our working people and the lives they lead. Nevertheless, every now and then you can actually see an actor or actress getting their hands dirty and making the chips fly. So here we celebrate six of our favorites, with one bonus TV show thrown in for good measure.

An assassin named Jack is dispatched to a small town in Italy by his handler, and given the task of building a custom rifle to be used for a special job. Jack doesn’t know at the time that the intended target is himself.

We see him in his spartan, rented apartment, living like a cloistered and emotionally-withdrawn monk. He’s assembling the components of his gun, which requires modification. Having already secured some washers from a local auto parts shop, Clooney himself is shown tapping and threading the barrel of the rifle and later building a noise suppressor for it. 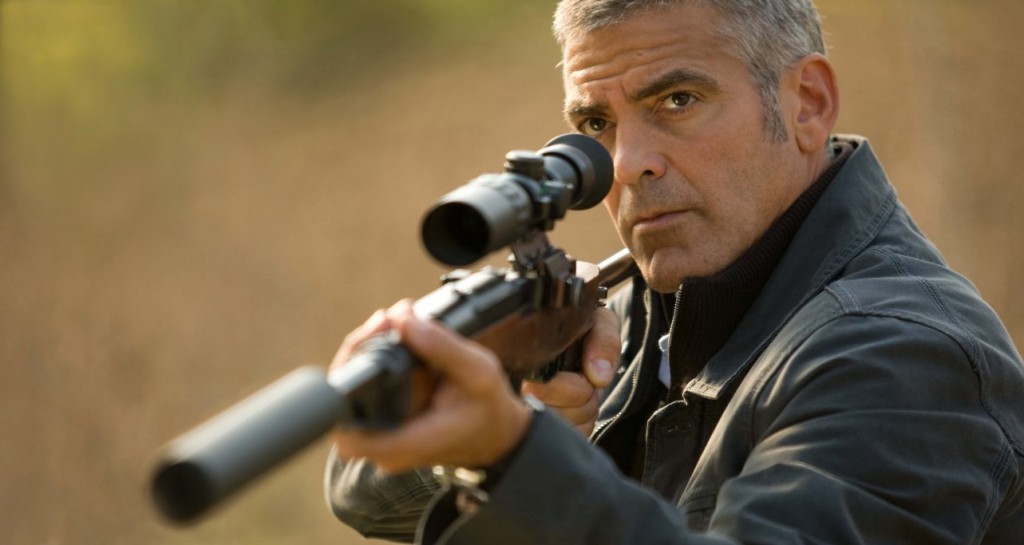 He works in complete silence, and there is no musical background accompaniment. He’s methodical, patient and disciplined like the master craftsman and consummate professional he’s intended to be. At one point, he must hammer the washer components into place. In order to disguise the sound of his hammer blows, he times them to coincide with the ringing of the local church bells, a sound which ominously suggests his own approaching doom.

Christian Bale plays Trevor Reznick, a machinist in a tool and die shop who suffers from terrible insomnia. Bale, the actor, became anorexically thin for this role, to portray a man on the verge of complete nervous collapse who finds strange Post-it notes all over his apartment and can no longer distinguish between reality and madness. 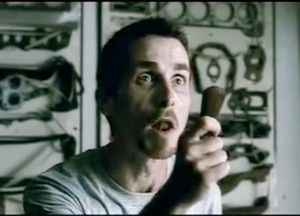 In the midst of that happy description of a well-adjusted and productive member of the workforce, we do indeed see him at his lathe, or turning handles on a vertical mill. Unfortunately, the mechanical nature of his work is not cause for respect but rather indicates another isolated, emotionally stunted man withdrawing into a machine world that requires no human interaction. 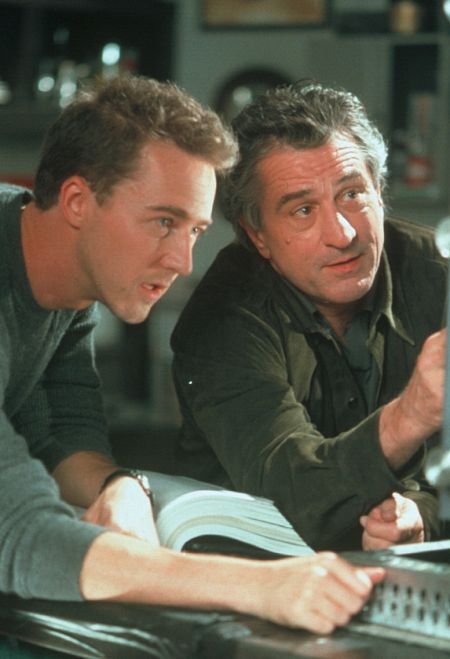 De Niro plays Nick Wells, a career criminal who wants to retire to the relative simplicity of his jazz club in Montreal. His partner Max, played by the great Marlon Brando, convinces him to do one last job, working with a young Edward Norton (Jack Teller) to steal a jeweled scepter from a secure vault in the catacombs of the Montreal Customs House.

In one scene, Wells and Teller are discussing the details of the job in Wells’ backroom workshop, looking over some blueprints of the safe they must break into. He’s got a combination mill/drill set-up and a variety of well-organized hand and power tools on pegs on the wall. This is clearly a man who knows what he’s about.

Wells explains his plan to Teller, who’s incredulous that it could actually work to get inside such an armored beast, but we don’t get the payoff until later. Wells has made his way into the cage where the safe is kept. Out of sight of the security cameras, he first uses a plasma torch to cut a hole in the top of the safe. This hole is then tapped and a plug is screwed in tight. To this plug is connected a water hose and the safe is filled to the brim with water. Once full, Wells lowers a blasting charge into the hole and seals it off. The charge is detonated and hydraulic pressure does the rest, blowing the safe door off its hinges. It’s all great fun, and filmed with a tight focus on the nature of the work at hand. You see nicely detailed close-ups of De Niro quickly and expertly bringing one tool after another to bear on the task, moving deftly while under a strict deadline. What’s especially appealing is the obvious respect for the mechanics and physics involved. Everything is plausible and done in real time without corny special effects.

We all know that John Rambo is the ultimate bad ass, and here he’s called upon once again to wade into the muck and use his special skills to save the day. A group of Christian missionaries is taken prisoner by a local warlord in Burma, so Rambo fires up the forge and makes a new blade out of a leaf spring. 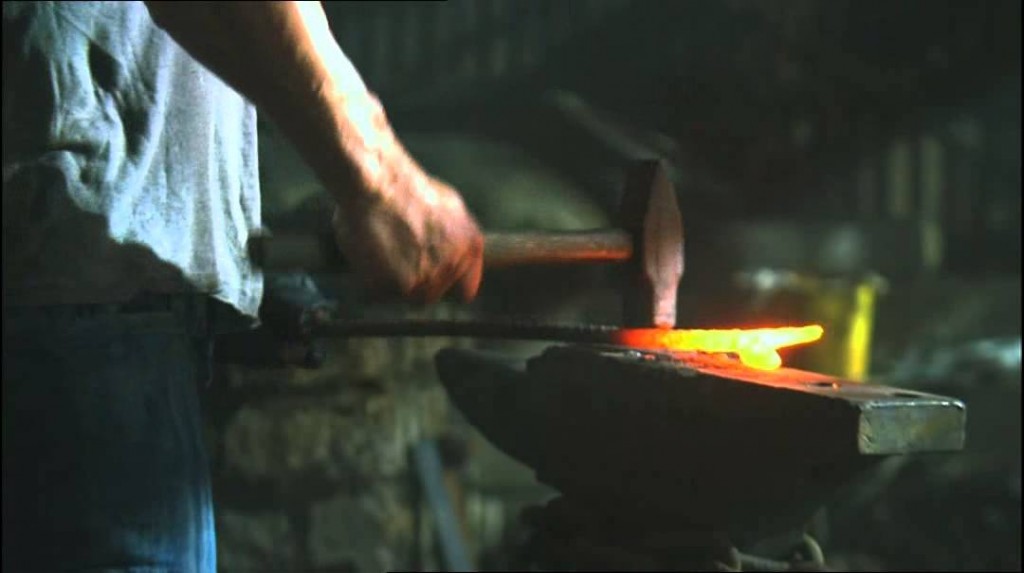 Still of Sylvester Stallone in Rambo (2008)

Bet you didn’t know that John Rambo knew how to forge his own steel, did you? That’s just the kind of thing a real man’s man is supposed to know, just in case…

This is Michael Mann’s directorial debut, and it’s a dark beauty indeed. James Caan plays Frank, an expert diamond thief looking to retire and go straight. (What is it with jewel thieves and machine tools, anyway?) Once again, he needs to do one last job so he can cash in and get out, but things predictably go wrong when Frank lets his guard down and trusts the wrong people. 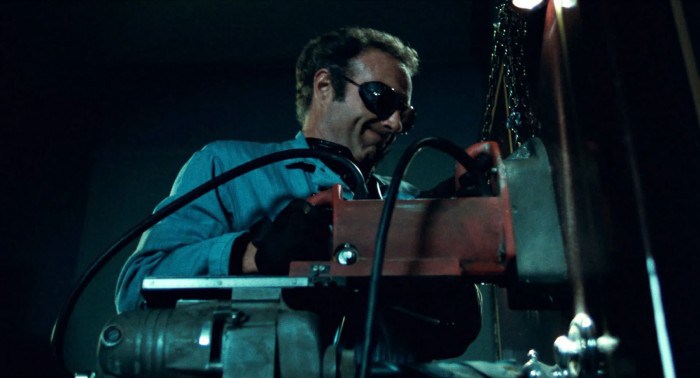 Here we see Michael Mann developing what will become his signature style, a tactile physicality that helps you to feel the heat of the metal under the practiced touch of Frank’s welding torch. More close-up camera work of a drill bit plunging into a vault door, sending curlicues of swarf spinning off in shining ribbons, shows Frank in his element, and you can feel that Caan himself, as a man and an actor, is perfectly comfortable with handling the tools of the trade and getting dirty.

“You like me, you really like me!” Thus did Sally Field thank the Academy when she accepted her Oscar for Best Actress in Norma Rae, the story of textile workers in a southern town who endure the harsh conditions at the mill until Norma joins with a labor organizer to help create a union in their shop. 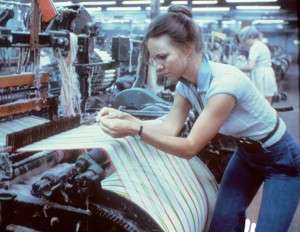 The work is hard and dangerous and fast-paced. We see Norma busting her hump day in and day out, stringing thread on the looms and barely staying out of the way of all kinds of automatic and uncovered mechanical arms, cogs and levers. People are routinely hurt and Miss Field put herself on the line to make her performance realistic. Kudos to her, and isn’t it a shame that it’s so hard to find any other examples of women workers? In real life, as we all know, they make the world go round but in Hollywood they barely exist.

Although not a movie it does come from Hollywood. This long-running TV series featured Anderson as secret agent Angus MacGyver, who works for a murky spy organization foiling bad guys all over the world. Everyone in America in those days knew who MacGyver was and his very name became synonymous with a certain kind of can-do resourcefulness to make or fix anything in a pinch. 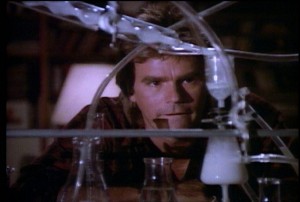 The gimmick of the show was that MacGyver never used a gun and hated violence, but he always found himself thrown into the middle of danger. With each episode he used his bottomless knowledge of science and engineering to take bits and pieces of whatever he could find at hand to create some kind of trip wire/alarm/fire/acid/smoke bomb/radio or whatever else was needed. This of course involved plenty of machine and tool work, and for millions of kids around the world it meant carrying your Swiss army knife with you at all times so you could do a “MacGyver” on any problem that came your way. What happened to that spirit?

Did we leave out any of your favorites? Let us know!