How 3D Printing Is Being Used In Medicine, Part 1

Advances in additive manufacturing, or 3D printing, are capturing the attention of healthcare professionals around the world. In fact, 3D printing in medicine currently accounts for nearly 13% of all 3D printing revenue. While the technology has been around for decades and has utilities across numerous industries, modern uses of 3D printing are dramatically altering the way doctors interact with the human body.

Sophisticated techniques for scanning and mapping its complex chemical and electrical activities now allow researchers to learn more about how the body functions and also how to intervene when something goes awry. This knowledge, combined with the proliferation of 3D printing, has the ability to create a wide array of solutions for fixing our ailments. In part one of our two-part article, we’re exploring some of the newest developments of 3D printing in medicine, specifically within the human body. 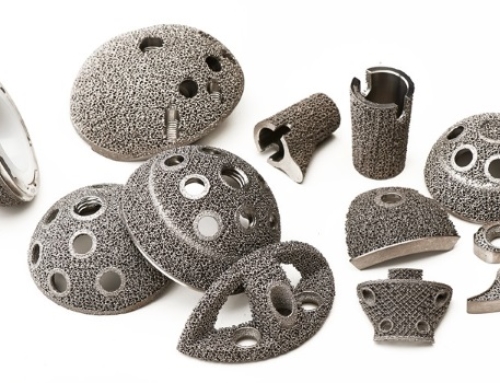 Bones, Joints And The Skeleton

There are roughly 206 to 210 bones in the human body and 360 joints. Your joints, which link your bones together, can wear out over time and cause chronic pain and loss of movement. As a result, joint replacement is one of the most common procedures performed by surgeons each year. However, it has only been largely available in developed countries. But, with compact 3D printers along with optical scanning, it’s possible to create new joints and sockets for hips, elbows, shoulders and feet which are fast, affordable, custom-made and ready on the spot rather than being shipped from abroad. The ones shown below are titanium, which is strong and biocompatible. In addition, the coarse surface texture— made easier with 3D metal printing—is ideal for creating porous surfaces into which new bone can grow over time. 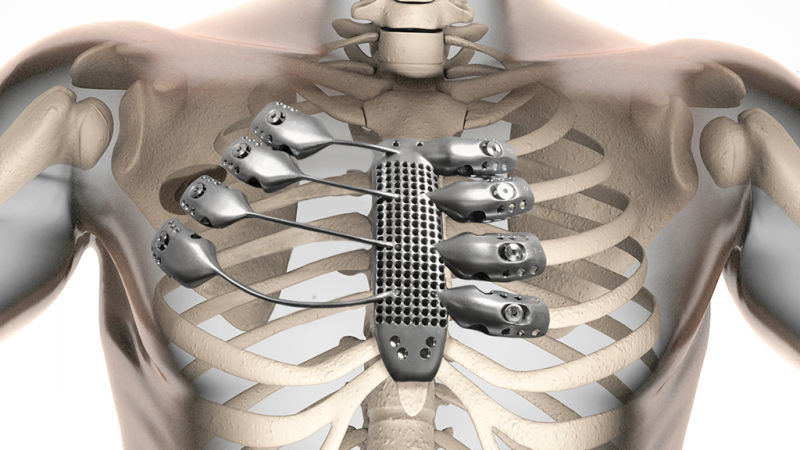 This is an image of a new sternum (breastplate) and ribs created from titanium to replace those that succumbed to cancer— the first such large-scale procedure making use of 3D printing in medicine.

We’ve written before about partial skull replacements. But recently, a surgeon in the Netherlands used 3D printing to create the entire cranial skull in two pieces—a perfect match for the patient’s facial and neck bones.

With the increased availability of 3D printing , prosthetics can bring hope to millions of amputees worldwide. Historical records of the use of wooden peg legs and arms date as far back as 400 BC, but there’s no doubt the practice is even older. Articulated wooden limbs to replace those lost in war started to become more common towards the end of the Civil War in the United States. But, they were still fairly heavy, with each needing to be measured and fitted by a specialist craftsman—an expensive option for many. 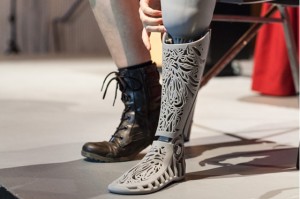 Now accessible 3D printers can be used to make new limbs in lightweight plastic or even carbon fiber which are perfectly matched to suit their new owners, and which even have quite a bit of design flair. Impaired athletes are also using springy artificial legs to compete at the highest levels of track and field sports. 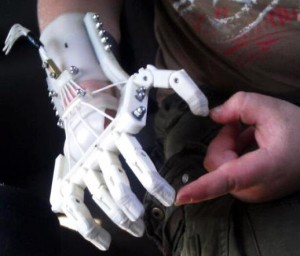 This articulated hand was created by a carpenter who lost his fingers in a woodworking accident. Not only did he design it himself and create activating motors, but he uploaded the pattern onto Thingiverse to make it available to anyone else similarly in need. Both resourceful and benevolent. 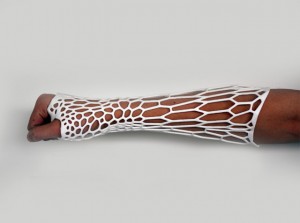 Unfortunately, we are prone to fracture or crack our bones. When this happens, it’s traditional to use a plaster cast to hold the affected bone in place while it heals. But, plaster casts are often hot, heavy and itchy, not allowing the skin to breathe.

The 3D printed solution pictured above was developed by creating a scan of the patient’s arm along with a detailed X-ray. Not only is this cast lighter and stronger than plaster, but it can be tailored to provide strength and support precisely at the point of the break where it is needed, while reducing weight and providing an added degree of flexibility. 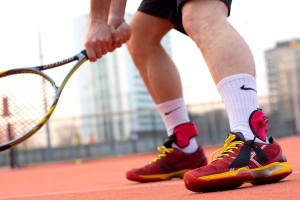 Better than healing an injured limb is to prevent injury entirely. That was the idea for the creation of an external joint aid called the Exo-L. Developed by the Delft University of Technology and the Erasmus Medical Centre in the Netherlands, the device is custom 3D printed to match the wearer’s affected limb. It fits comfortably and is designed to prevent the ligament from twisting during sporting activities. 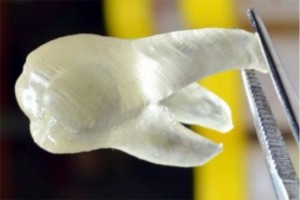 Tooth decay can potentially result in cavities or even tooth loss. We dread to consider what early dentistry must have been like. Luckily, dentures and artificial teeth are now quite commonplace, and 3D printing in medicine has even made it possible to 3D print teeth in high-tech materials like stainless steel or titanium. But, now there’s another option to consider. This tooth can be made from ordinary dental resin that has been inseminated with ammonium salts, which kills most disease-causing bacteria on contact. Even with dentures, there is still the danger of gum and nerve disease. However, this innovation might make that practice obsolete, and it’s almost as strong as the real thing.

In part two of our series, we’ll look at other medical miracles taking place involving tissue, organs and drug therapies. In the meantime, learn more about our services and see how Star Rapid can help you make what was once impossible, possible.

How 3D Printing Is Being Used In Medicine, Part 2

The First 3D Printed Object In Space
Sign Up for Newsletter