Star Rapid Joins The 2015 “Sunshine Is Beside You” Charity Party 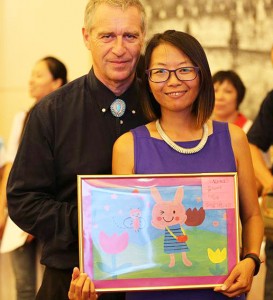 On June 28th, Star Rapid was happy to participate once again in the “Sunshine is Beside You” charity party. As loyal readers already know, this has been an especially memorable and auspicious year. Our own Jerry Grey has already been featured here, having completed his epic journey from Zhongshan to Urumqi, by bicycle, to raise money for the needy in Zhongshan. His partner in that ride, by the way, was Phil Behan, who’s also responsible for taking these great photos.

Well, now it’s Jerry’s wife Ann’s turn. She, along with her partner Darrah Blackwater, completed a walk from Zhongshan to Beijing, a distance of more than 2200 km, both to raise money and awareness for the needs of the disabled in China. The “Sunshine is Beside You” charity event, now in its tenth year, is meant to collect contributions to help the poor and disabled in and around Zhongshan. Darrah is supporting “New Day Foster Homes”, which provides medical, educational and other assistance to orphans with disabilities.

The event was an enormous success, raising more than 360K RMB, both in direct contributions and from the proceeds of an auction of beautiful art pieces kindly donated to the cause from noted artists and from the needy themselves. 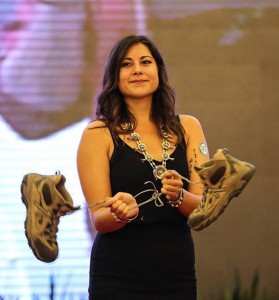 Perhaps the highlight of the auction was the pair of shoes worn by Darrah during her long walk, which had been donated to her by Anthony Su of United Shoes. These same hard-working boots eventually fetched more than 10K RMB – and then were immediately given back to Darrah, with the proviso that she never part with them again. And who bought the shoes? None other than the director of the Zhongshan Volunteer Association.

Many people were responsible for helping to support Ann and Darrah during their difficult journey. The partial list includes not only Star Rapid but also HGR Technologies, Len Philp and ZSRenn, United Shoes, Jam Cafe, The Zhongshan Volunteer Association, the Zhongshan Foreign Affairs Council, the Zhongshan chapter of the International Red Cross, Paul Jolley and family, Anthony Su and family, Rene Forster and family, and a long list of friends and well-wishers who tried to help before, during and now after an epic journey. Their motto? “Ni Ke Yi”! Which is “You can do it!” in Chinese.