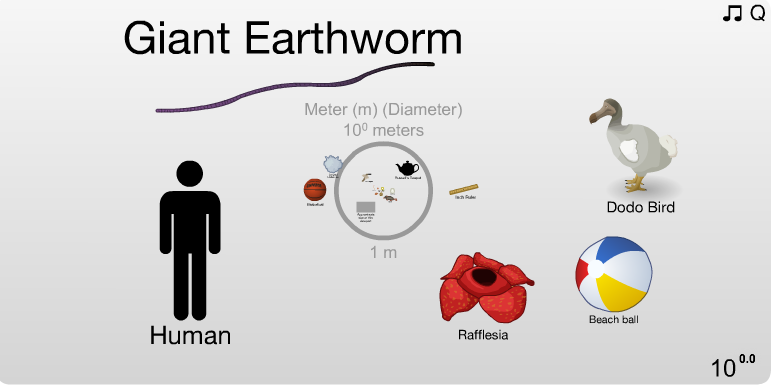 We will assume that if you’re reading this then you fit the general profile of a creative, intelligent person of good taste and breeding. You’re also interested in engineering, science and technology, all of which we applaud. Well, prepare to have your mind blown.

When working with product design and manufacturing, whether it be for a prototype, an injection molded part or rapid tooling that’s CNC machined, you always need to be mindful about tolerances, typically between millimeters (thousandths of a meter) and microns, or millionths of a meter. Of course, that means .000001 meter. Or .001 millimeter. Or 10-6 M. It can all be rather confusing, and don’t get us started on imperial inches. But the point here is that just a few powers of ten, larger or smaller, can make a very big difference indeed. Scientific notation is used to mathematically describe these scalar differences, but it can be hard to actually visualize what a micron is, and how it compares to a millimeter or, for that matter, to a person.

The above screenshot is from an incredibly useful and wonderful tool called the Scale of the Universe, which can be found here: http://scaleofuniverse.com. It’s an interactive online application that allows you, the humble human in the representation, to compare the relative size of yourself to other common objects that we share this amazing cosmos with. Just a few minutes playing with the slider, zooming in and out, will have you hooked.

Note that in the above screenshot, the scale in the lower right hand corner is 100.0. That’s one meter, appropriate as a starting place for comparing other objects to the average size of a person, or a beach ball or a dodo bird. (Even though extinct, the dodo can still be useful!) Let’s zoom in a little closer and look at some scales that are meaningful for engineering and manufacturing. 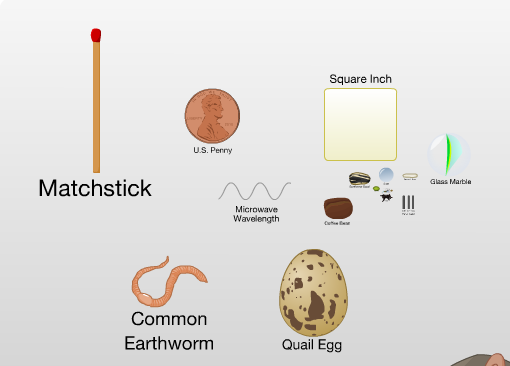 Here we can see a square inch, and how it compares to a penny or a coffee bean. Note also that a microwave wavelength is on the same scale, and would easily be visible to the human eye. By the way, this is 10-1.5 . In manufacturing we don’t use square inches, though. We use millimeters and smaller, so where is that? 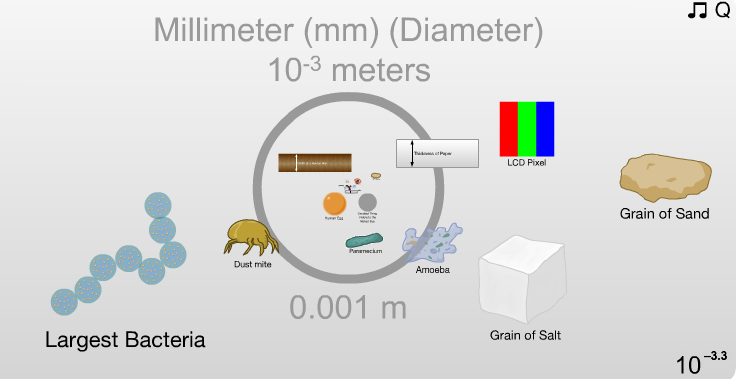 Ah, there’s our millimeter. Just a bit larger than a grain of salt, and about the same size as a large bacteria. That’s pretty small compared to a person but still very large if we’re talking about the precision necessary to make quality machine tools or finished parts. At STAR, we usually make rapid tooling with a precision of .1 mm, or 100 microns, though we can go down to 25 microns if necessary. Remember also, 25 microns is smaller than what can be seen with the human eye, and is equal to infrared wavelength.

It’s important to note this not only because it’s cool (it is), but also to emphasize that size measurements and manufacturing on this scale start to bump up against certain immutable physical constants of nature. In this case, thermal expansion and contraction of cutting tools and steel or aluminum parts will have a measurable effect on finished tolerances. Things “move” on this scale, including molecules and their interaction with the electromagnetic energy all around us.

It also helps to show that in situations where a finished prototype must only meet visual inspection standards, 100 micrometers, or .1 mm, is the smallest thing that we can see with our unaided eyes and is probably much better than it needs to be. So often there’s no need to spend the time or money to get to tolerances tighter than this on prototypes. 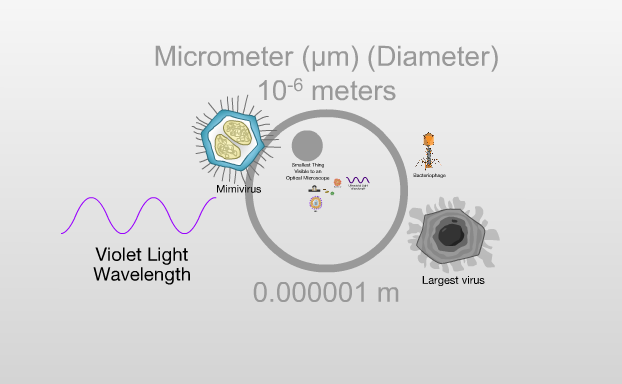 A micron is much smaller that what can be seen with the human eye. Viruses, the simplest forms of life, are just a bit smaller than this. Now you can start to get a sense of the difference a few factors of ten can make.

There’s so much fascinating information here we can’t possibly cover it all, but in later posts we will talk more about the science and art of metrology, that is, how we measure things. This is critical for quality assurance, of course, but as a product designer or engineer it’s also helpful to have a more clear visual conception of how different sizes related to one another and to us.

One last point. What’s the smallest thing that we can see with an optical microscope? Well, it’s that little grey circle inside the micron, above. That’s 10-7, and anything smaller than this is shorter than the wavelength of visible light. And if your mind’s not blown yet, just play around on our website a little bit more and it will be.