While 3D printing technology has been around since the 1980s, it is constantly evolving, with new processes being introduced all the time. Some are best suited for consumer applications, while others for industrial environments. However, not all types are suited for rapid prototyping, a technique used to create prototypes quickly and test out a wide range of solutions in a shorter time-span. Let’s take a look at the top 7 methods for 3D rapid prototyping so that you can assess their strengths and weaknesses for yourself and decide which one might be the best option for your next project.

Stereolithography is one of the oldest and most popular commercial 3D printing methods in the industry. This process uses UV light to convert photosensitive liquid into 3D solid plastics. These layers are derived from two-dimensional cross sections of the 3D CAD model and controlled with a software file format called .stl. 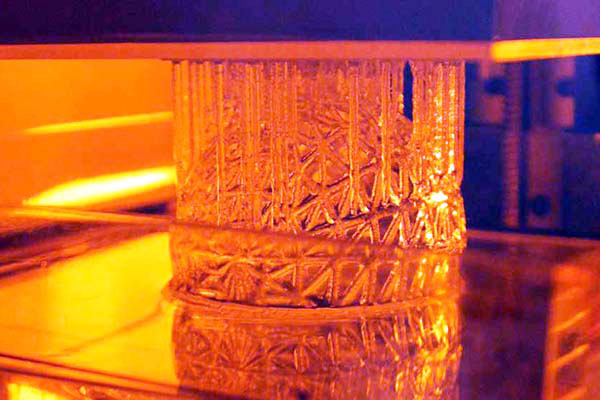 SLA printers often use an orange filter to screen out unwanted UV light.

This is noteworthy because, being the first, .stl has become the default computer language used by most modern 3D printers, regardless of the printing technology employed.

Stereolithography is best for creating high-quality prototypes, complex geometrical shapes and master patterns for vacuum casting. SLA is also fast and inexpensive and the finished product is often strong with a smooth finish. Supports may or may not be needed depending on the machine.

Patented in the 1980s by Carl Deckard, SLS is an additive manufacturing method that uses a high-power laser to fuse powdered thermoplastics into parts. These parts are formed on a build plate one layer at a time. Because the support is surrounded on all sides of the powder media, additional structures are not needed. 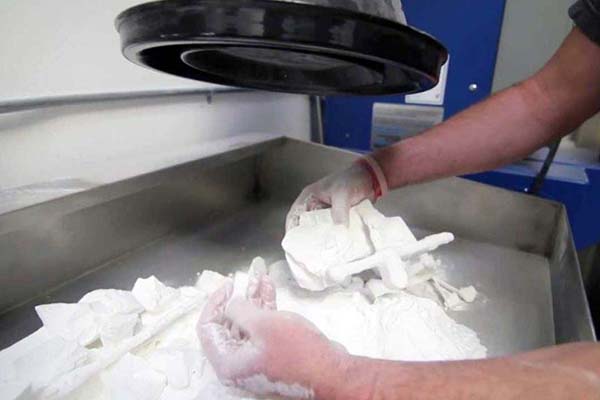 Excess powder being cleared away after SLS printing.

SLS can work for either plastic or metal prototypes. Like many other rapid prototyping 3D printing processes, the great advantage here is that parts can be made with complex geometries like internal lattice structures that would be difficult or impossible to do any other way.

However, the surface finish is usually rough and may require secondary work to complete it, especially if it’s used as a master pattern for later casting. The strength is also not as high as SLA printed parts.

Developed by Scott Crump, co-founder and chairman of leading 3D printing manufacturer, Stratasys Ltd., FDM is popular in industries ranging from automotive to consumer goods manufacturing. Put simply, FDM printers use a thermoplastic filament to create 3D objects. The filament is then melted inside the barrel of a printing nozzle. Once it becomes hot liquid resin, it is laid down layer-by-layer. Before an object can be printed, it has to be converted into a format the 3D printer can comprehend, which is typically an .STL format. 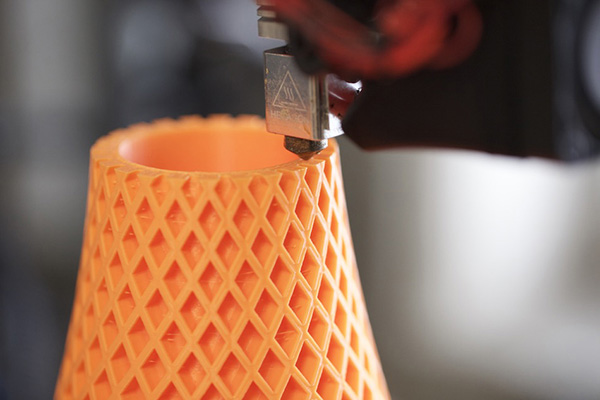 FDM printers are commonly found in small shops and even in the home.

FDM printing is clean, inexpensive, easy-to-use and can accommodate different types and colors of plastic combined in a single build. It’s also safe enough that even children can use it in a classroom. However, FDM printed parts have poor resolution and finish quality, and the parts are not very strong compared to other 3D rapid prototyping techniques. On the plus side, one of the biggest advantages of FDM is its scalability, making it ideal for creating prototypes and models during the development stage.

SLM is the preferred technique for making sophisticated parts of the highest strength, durability and complexity. It’s important to note that the process can be expensive and, therefore, should be controlled by a skilled engineer. But, the results are ideal for the most demanding applications in aerospace, automotive, defense and medical parts.

In LOM, materials like plastic, paper or metal are laid out across a build platform by a system of feed rollers. With each layer, a computer-controlled laser or other cutting device traces out the pattern. The build platform then drops by one-sixteenth of an inch, which is the typical thickness of one layer, and a new laminate is glued on top and the process continues. 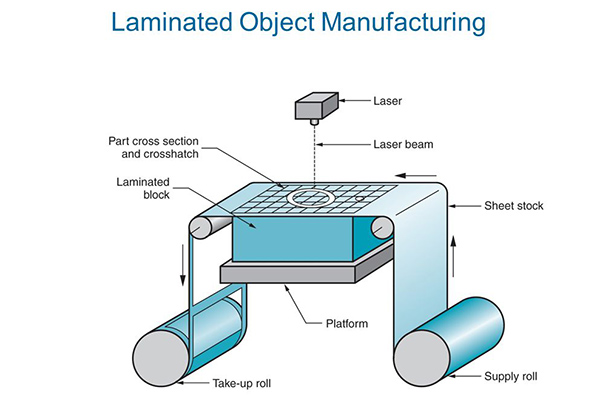 Laminated 3D printing can be used with a variety of thin, flat media.

This stacking process makes a finished part which is less sophisticated than an SLS or SLM equivalent, but it is more affordable and does not require specially controlled working conditions. Also, if paper is used as the laminate, the finished part will be similar to solid wood and can be manipulated accordingly.

Another variation on the polymerization of a curable resin, this type of technology is comparable to SLA printing. It cures the resin with a more conventional light source but also requires support structures and post-build curing.

The approach is generally faster and a more shallow reservoir of photoresin can be used, which also cuts down on costs. Like with SLA, the finished part has excellent dimensional tolerances and surface finish. 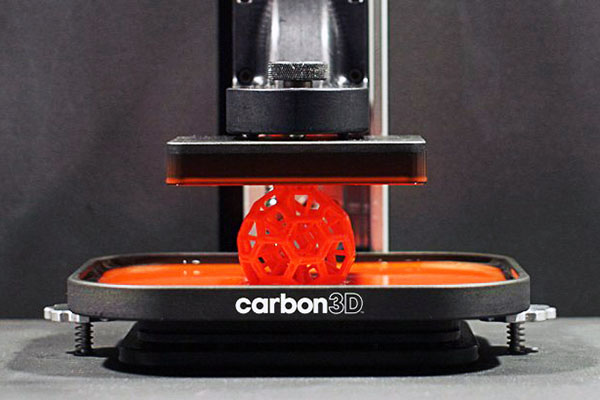 An interesting variation of this process is called CLIP (Continuous Liquid Interface Production).  In this case, the part is pulled from the vat in a continuous motion – there are no layers, it is an uninterrupted process.  As the part is withdrawn it crosses a light barrier that is programmed to alter its configuration to produce the requisite cross-sectional pattern on the plastic.

A relatively new rapid prototyping 3D printing process, binder jetting printing systems offer larger build volumes than many other power bed technologies on the market. Over a horizontal print bed covered in metal powder, hundreds of nozzles spray micro-fine droplets of a liquid binder to form a single layer. This layer is then compacted with a roller, re-coated with powder and then sprayed for the next layer. 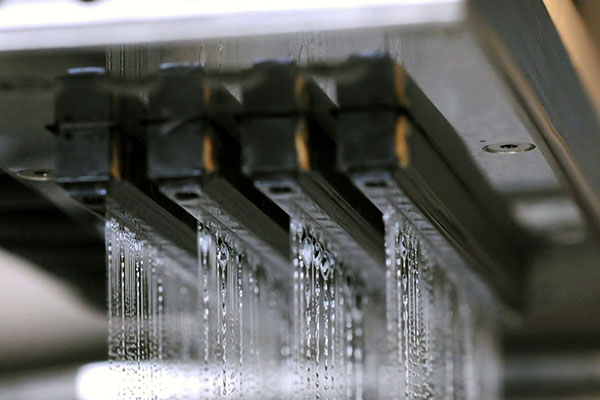 Binder jetting may be the high-volume solution for large scale 3D printing in metal.

When semi-finished parts are removed from the build chamber, they must still be cured in an oven to burn off the binding resin and fuse the metal powder together into a solid.

The advantage here is that many parts can be printed at one time, and the full volume of the chamber used. Such parts are not as strong as fully-welded SLS parts but they can work as mechanical fittings. Although this technology is still under development but it may be up to 100x more cost-effective than previous techniques.