For thousands of years men and women have been making miniature replicas of the world around them. Whether as prototypes for full-sized engineering projects, as toys, or to test mathematical and physical concepts, small-scale replicas never fail to fascinate and enchant old and young alike. Presidents, kings and emperors have been gifted throughout the ages with miniature facsimiles of treasured palaces, magnificent sailing ships and weapons of war, while dolls and puppets have mimicked the human form with complex articulated joints and lifelike features, presaging the eventual development of robots that continues to this day.

As we produce ever more sophisticated machine tools and CNC software, the ability to work on the small scale has increased accordingly. When we talk about CNC machining and 3D printing on the commercial scale, we’re typically dealing with large machines and production volumes. But here we want to take a look at individual craftspeople working alone in their home shops, who use both manual and CNC tools to create the most amazing models of anything you can imagine, not just as a hobby but as living testament to the fundamental joy of seeing and feeling an idea come to life under their fingers.

And because it’s really, really cool. 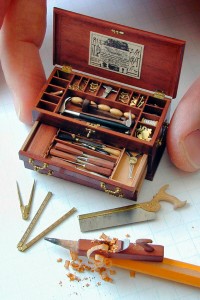 The ravages of time and neglect have taken a heavy toll on much of our collective history. Artifacts from the past – especially if they’re made from perishable material like wood and paper – continue to crumble back into the humble dust from whence they came, which is not only poignant and sad but also robs us all of the chance to feel and understand so much of the world that preceded us.

Luckily for us we have people who are interested in preserving the past and who have the skills and patience to bring some of it alive again. Look at some of these amazing examples of period furniture and miniature firearms, produced with a nearly microscopic level of detail and complete historical accuracy. 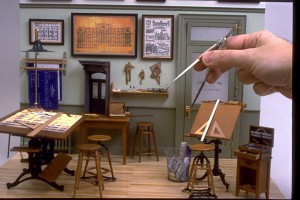 People around the world have marveled at miniatures as a way to tell the story of their own history, even without having access to the most advanced equipment or shop space. Here we have a very fine British wheelock pistol with 56 interlocking parts, fully-functional at 1/6 scale. This was made by Mr. Xu Yan of Tianjin, China, showing that a love of fine small work is universal. Also note that only very small guns are permitted for personal ownership in the PRC! 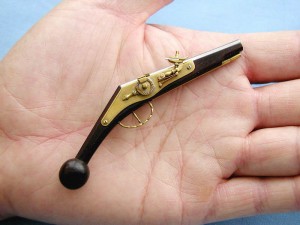 In the golden age of the French Empire before the Revolution, the Emperor would present his highest honorarium to an especially brave soldier, exemplary statesman or other grandee, and that would be a matching set of dueling pistols in a presentation case, such as we have here. The undisputed master gunsmith of that era for making such pistols was M. Boutet of Versailles. 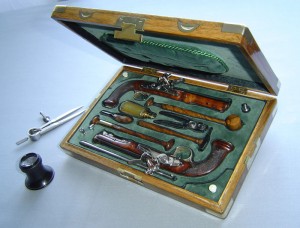 A special subset of interest in precise miniatures involves the recreation of machine tools, some of which are themselves fully operational and used to make small parts. Here are a few fine examples among many possible. 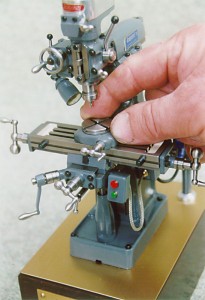 A mini-Bridgeport knee mill in 1/14th scale by Barry Jordan. Completely operational in every way like the original, it is run from a 1.5 VDC motor. No castings were used for this model, it was all machined from stock. 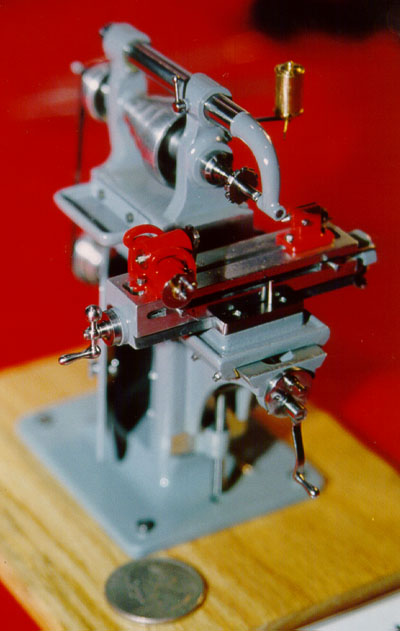 A Browne and Sharpe mill with a dividing head, pictured here next to a quarter for size comparison. This is from Mr. Jerry Kiefer, who is also renowned for making the world’s smallest attachment hardware. He makes his own hex head screws with threads one-half of one-thousandths deep. He’s not telling how he does it!

Another fine way to understand the progress we’ve made over the centuries is to actually see the instruments that our forebears used to explore the world around them. The incredible workmanship it takes to duplicate these early instruments is also a testament to what it took to build them in the first place, when modern CNC machine tools were not available. 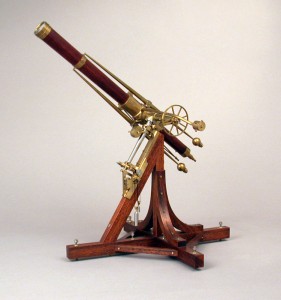 The above instrument is a copy of a telescope from 1823 built by Joseph von Fraunhofer of Estonia. The original was at that time the largest telescope in the world and is still considered one of the most important scientific instruments in history. Here it is reproduced in meticulous detail in 1/12 scale. von Fraunhofer used this telescope to become the father of the science of astrophysics. 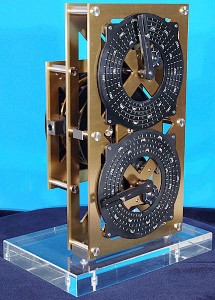 We’ve talked before about the magnificent and enigmatic Antikythera mechanism. Here we have, not a duplicate of that device but a clever reinterpretation of it. Much of the original is missing or is damaged, so its exact function and purpose is still a mystery. Miss Tatjana Joëlle van Vark of the Netherlands is a polymath interested in all manner of scientific, artistic and technical matters, and here she re-imagines that ancient computer using her own insight into how it may have functioned.

Virtually every schoolboy (and many girls, ahem) has at one time or another made a model boat or car, and some people carry this hobby into adulthood and turn it into a beautiful art form. In earlier times, model ships were used not merely as amusements or museum pieces but to study new methods of hull formation to improve performance and stability in the water.

The number and type of such models we might represent here is beyond the scope of this blog post. There are simply too many fine examples to choose from to do justice to the work as a whole. We would like, however, to offer two especially nice specimens. 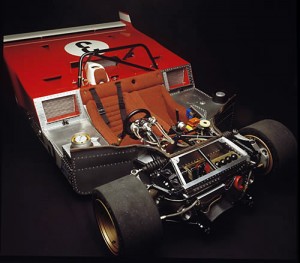 1/3 scale Ferrari 312 PB race car from Pierre Scerri of France. Completely functional down to the gearbox, lights, suspension and everything else. M. Scerri had to teach himself all the skills necessary to fabricate the entire car from scratch, a labor of love taking twelve years. 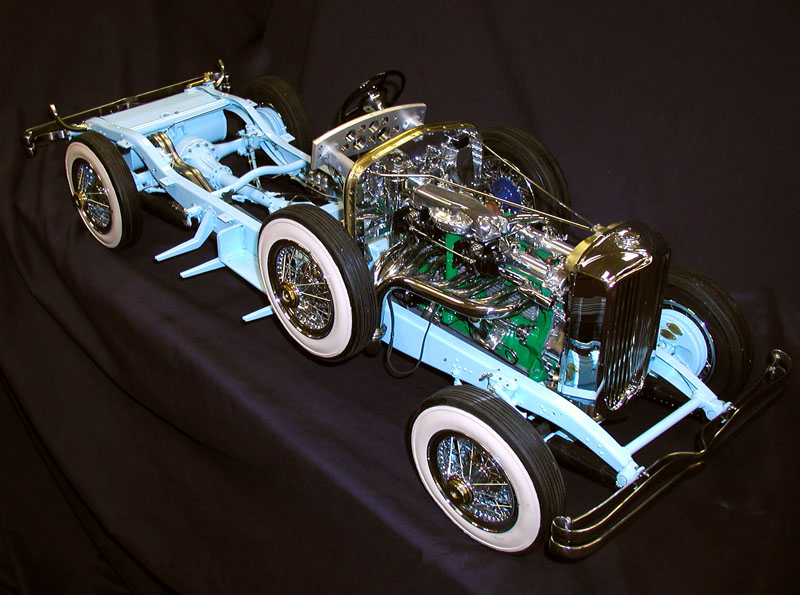 1932 Dusenberg in 1/6 scale by Louis Chenot. One of the finest working models ever made, it took ten years and contains over 6000 handmade parts.

All of these superb works of art were made using the same types of tools and processes that are routinely employed in a machine shop to make more common things, except that the men and women doing the work were motivated by a passion for craftsmanship and personal excellence rather than any thought of commercial gain. Many were self-taught, demonstrating an admirable commitment to the timeless joys of making something beautiful with head, heart and hands. Remember, working small is harder! What do you think? Drop us a line and let us know.