Additive manufacturing and 3D printing have now been around for more than thirty years. Touted as heralding the advent of the third industrial revolution, desktop manufacturing promises to fundamentally alter the way that average citizens envision and create the objects that make up our world.

Of course you already know all this. But aside from the obvious industrial and commercial applications, 3D printers help bring to life concepts that previously could only be visualized or expressed in complex mathematical equations but which could not be made as solid objects. Now those objects can be printed via readily available modeling software, to produce physical forms that beautifully combine the worlds of science, mathematics, medicine and art. Consider some of the following: 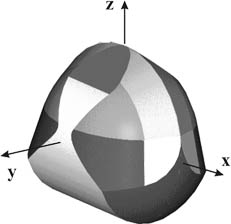 Previously conjectured, the proof of the Gömböc’s existence was found by Hungarian scientists Dr. Gabor Domokos and Dr. Peter Varkonyi. A Gömböc is defined as a homogenous, non-concave solid with only one stable point of equilibrium and one unstable point. That means that, no matter which way you rest it on a flat surface, it will roll and tumble around until it finds that one balance point. Indian star turtle shells are like this too, so if they get tipped over they will automatically right themselves. 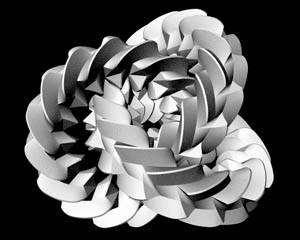 Triple gears are actually a single, geared ribbon, twisted and knotted upon itself until it forms three interconnected gears, all of which must turn simultaneously if any of them can. This would not be physically possible if the same gears were side-by-side on a table, and is here made possible only by rotating them along a skew axis. 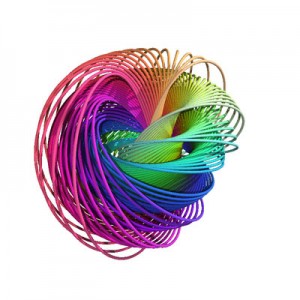 A Hopf fibration uses circles and an ordinary sphere, folded upon one another, to mathematically describe a 4-dimensional hypercube. Take that. 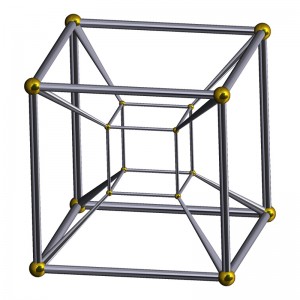 And what’s a hypercube? Imagine an ordinary cube in our 3-dimensional universe, extrapolated at right angles in all three dimensions. The resulting object would cast a shadow something like this. 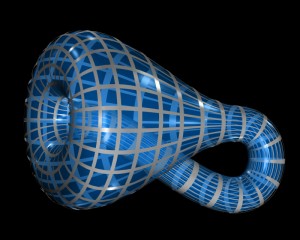 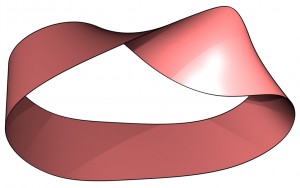 A Klein bottle and a Möbius strip are closely related. We all know that a Möbius strip is usually a strip of paper, twisted once, with the ends then joined together. The new shape is said to have only one side, since the previously separate sides have now been joined as one. The Klein bottle is like that, but instead of a flat two-sided strip it uses a tube, where one end of the tube is turned around and attached to itself. This shape can in fact only be partially represented, since the mathematics of a real Klein bottle make it a four-dimensional object that can’t exist in our universe, sad to say. 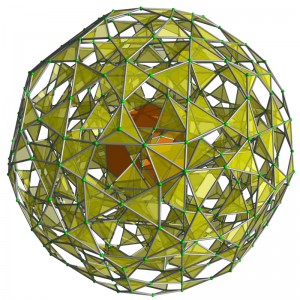 A 120 cell is also called a hyperdodecahedron and is another model of a mathematical construct, creating 720 pentagons meeting at 1200 faces and assorted vertices. Beyond that, don’t ask me, but it’s cool. 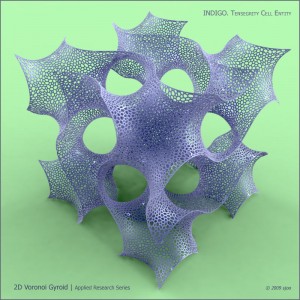 A Gyroid is another lovely mathematical formula brought to life. First discovered by a NASA scientist in 1970, it’s a way to describe a bounded space, or minimal surface that is triply periodic. Aside from being compelling to behold, a Gyroid also shows up in nature where there are other minimal surfaces, like in a soap bubble or the iridescent wings of a butterfly.

The possibilities here are limited only by your imagination. Many of these shapes are being used not just as curious art pieces, but to help young students learn to appreciate the beauty of mathematics and the sublime patterns to be found in nature. 3D models help doctors to better visualize viruses and bacteria, or chemists to map the complex ways that molecules bind to one another. No longer only in the hands of scientific literati, these new technologies are democratizing knowledge and helping learners, young and old, to be fascinated by the world around us.