In which we explore the marriage between classical art, tragedy, love, science, 3D printing, inspiration and ultimately the fleeting nature of reality. Or something like that. 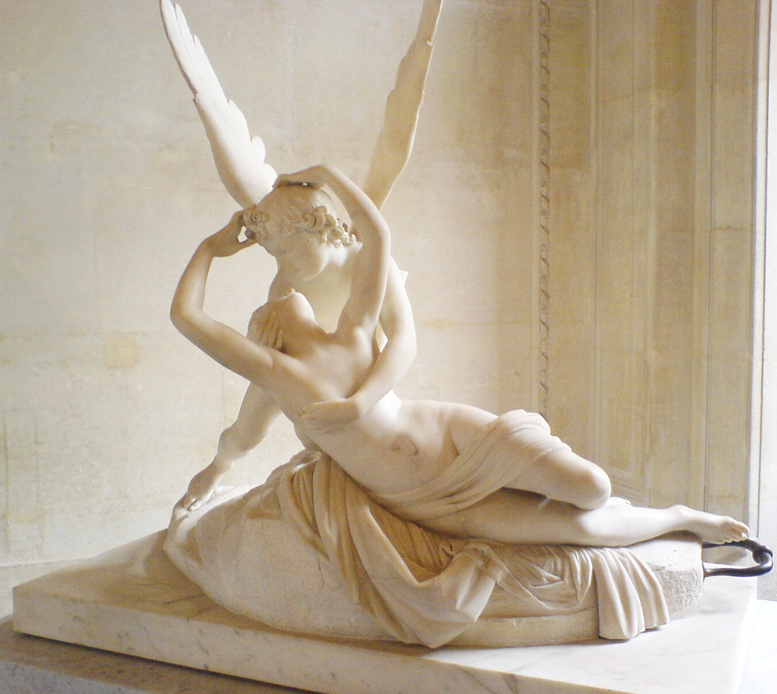 Above is a statue in the Louvre of the Greek god Cupid reviving his sleeping lover Psyche with a kiss. In the ancient tale of Metamorphoses, Psyche is separated from Cupid by jealousy and accident, and is eventually tormented by Cupid’s mother Venus with a series of impossible tasks (what is it with Greed tragedy and impossible tasks?) before finally being reunited with her love for the rest of time.

The tale can be read as allegory, myth, satire or cautionary morality play – maybe all of the above. In our case, it forms the foundation of an amazing modern love story which also just happens to intersect with 3D printing at the smallest imaginable scale. 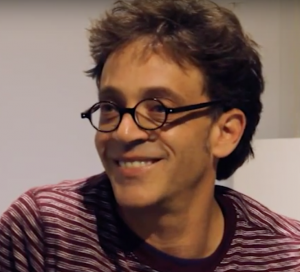 Enter our first player stage left, Mr. Jonty Hurwitz, an engineer by training and an innovator in several fields of e-commerce, cloud computing and financial services. Oh, and he also happens to be an award-winning multi-media artist who met his muse, the great love of his life, more than 25 years before this tale unfolds. In homage to this love he wanted to make the very smallest representations of the human form ever attempted, delving below the level of the merely microscopic and down to nano scale and from there, out of sight.

You remember a nanometer, don’t you? Sure you do, when we talked before about the interactive scale of the universe. That’s one billionth of a meter to you and me, and it’s so small that it goes below the wavelength of visible light – I don’t care how good your eyes are, that’s invisible. But first things first. Before we can start building on the nano scale, we need to first know what we’re trying to make. 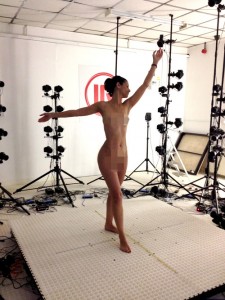 Mr. Hurwitz had as his inspiration the statue of Cupid and Psyche and his own love (who shall remain nameless, purely in the interests of romance) modeling the role of Psyche. After a long search, Mr. Hurwitz found a large warehouse space in Sussex, England, and within that space were set up literally hundreds of high-quality Nikon cameras on stands. You may remember that the very first 3D printed objects were made by François Willème in 1859, and to make those he had a subject mounted on a carousel which was surrounded by 24 cameras. Each camera would make a still photo, and from that photo the proper rendering was made on a canvas using a transfer pantograph. Phew.

Now, hundreds of cameras firing away with gigabytes of collective pixels were used in much the same manner, to make a giant 3D data file. Normally a 3D file would be sufficient to load into a CNC machine for traditional subtractive manufacturing, or alternately used in one of several possible 3D printing machines for additive manufacturing. Nowadays, there is an ever increasing assortment of sizes and shapes and types of 3D printers and the materials they’re able to work with, including glass, plastic, metal, human tissue, and even edible foodstuffs.

The scale of potential manufacture has also increased, to be inclusive of machines big enough to print large building panels such as we’ve discussed previously (link). On the small end of the scale, however, 3D printers have been limited by a few physical factors, but typically small layers (as opposed to actual finished pieces) are in the range of 30 microns. Conventional machining can, under controlled conditions, produce surface accuracies on the scale of 30 microns or better, but not finished pieces. That’s pretty small, but not nearly small enough. What to do?

Another search ensued, unit he found some interested and frankly excited scientists and researchers at the Weizmann Institute of Science in Israel and the Karlsruhe Institute of Technology (KIT) in Germany who dived into the physical difficulties involved once they heard about the project. Maybe they were romantics at heart, too. There were many ideas back and forth involving an array of cutting-edge techniques, computer simulations and much more, until finally they hit upon the solution, and it goes like this:

The printing of prototypes using UV light to cure a photosensitive polymer is not new, either in the form of stereolithography (SLA) or more recent incarnations like the Carbon 3D continuous printing system (link). In those cases, when the polymer is struck by UV light it will solidify and form a layer at the surface of the liquid bath, but the thickness and resolution of that layer is still too crude. In the new technique longer wavelengths of light are used at high intensities. Two light beams are tightly focused through microscopic lenses, and where those two beams overlap – and we’re talking about an intersection the size of a photon – the polymer will absorb both photons and become cured only at that exact spot. This is playing with physical matter so small that quantum electromagnetic effects come into play, with the result that extremely small and fine resolutions can be achieved. By the way, a single photon pixel used for printing with light is called a Voxel, in case someone asks.

Now that the stage is set at last we can proceed with our play. The researchers at KIT sent to Jonty Hurwitz his seven completed sculptures based on the story of Cupid and Psyche. They arrived in a box the size of a washing machine. That box, stuffed with foam paper and bubble wrap, yielded a smaller box, and yet another smaller within that, down and down like a Russian matryoshka doll. At last he uncovered a small case like a jewelry box. Inside the case was a simple flat square mirror, and nothing else.

With a sense of puzzlement or disillusionment or sheer frustration, he tilted the mirror this way and that, searching for….something. And then a slanting ray of sunlight shining through the window caught the dancing motes of dust that floated on the air in his kitchen. He followed the motes down to the mirror, and seemed to find – maybe – a line of the faintest white smudges on the surface of the glass.

From there he got out a cheap eye loupe and tried 10X, and then 20X. Nothing. He invested in a nice laboratory-grade microscope, good up to 300x. Nothing definite. He knew to expect something, since the researchers at KIT had sent him some preliminary photos. He then sent one of those photos to a man who uses a scanning electron microscope to photograph cells and bacterium and other small objects. This man – let’s call him Mr. G. – said the photos were the most beautiful things he had ever seen and he begged to be a part of exploring more, his time and equipment utterly at Mr. Horowitz’s disposal.

So, it was off to Mr. G’s lab, where, after placing the mirror plate into the scanning electron microscope and putting it under vacuum, the following was revealed. 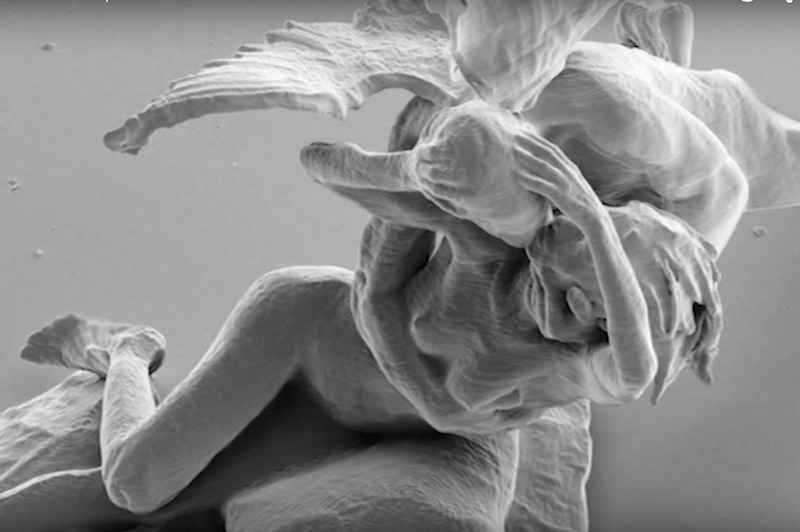 The men were struck dumb with wonder and joy. They were looking at the smallest human figures ever conceived or attempted, much smaller than the width of a hair.

Each image revealed something of a miracle, one that Jonty Hurwitz was anxious to share with the world. But Mr. G wanted to get a better look at the sculptures, and from a different angle. He removed the mirror and had a colleague carefully chamfer the edges so that it could be rotated to a new position. Mr. G replaced it into the chamber, and let out the slightest “oops”.

The images had disappeared. They could not be found anywhere. Hurwitz took out the mirror and looked it over. There, in the center of the mirror, was a giant Mr. G fingerprint. The sculptures were gone. They had lived long enough to see the light of day and to be admired by their creator, and just like the myth upon which they were based, they vanished with all of the same classical beauty, tragedy, humor and emotion.

Perhaps Jonty Hurwitz himself, no stranger to irony, said it best:
“A physical object went missing, and in its place it left a story.”

We would never do that to you however, ahem. Our 3D prototypes are much larger and more robust than a fingerprint, we promise. Why not find out? Contact us today. 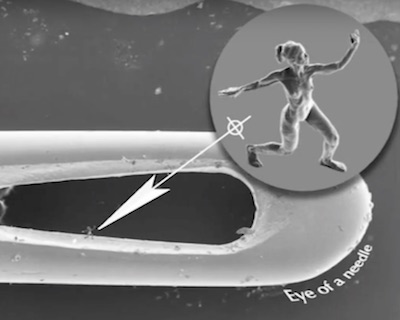